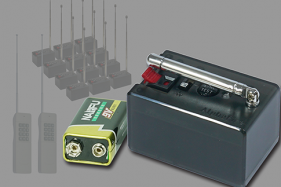 New!!! The 9th Generation Module of AlphaFire.
AlphaFire is the first product which was designed in 2008 and has been improved all along, and the newest AlphaFire X is the 9th generation. Comparing with the other generations, the 9th is with the advanced features below:

Full Current Output--More powerful, can fire 15 standard igniters at most in series connection, also can fire Nichrome Wires and reuseable igniters.
Firing DEMO (Check SYNC)--Even when igniters are connected, users can still check the synchronization and find if the system works correctly by DEMO.
1x Square 9V Battery, any type--Don’t need so many batteries inserted and is more convenient. Any type of square battery is available.

Low Power Warning--Users can easily find if a battery is available to fire an igniter, so that may avoid failure.
TEST-SYNC / ARM become more clear and simple.
Power Saving--Test Current is less than 0.1mA.

Of course it can work out all functions of the former generations, and is also with the simpler layout of LEDs, button and switch etc., easier to synchronize transmitters / remotes.
The firing module is FCC and CE certificated. Some matching transmitters / remotes are also FCC and CE certificated. The firing module can work with long range transmitter to work out 2000m range.
Click the picture above to know the details. OmegaFire Basal is an Intellectualized Masterslave fireworks firing system, which can be controlled by an Android device through LAN / WAN access, or RF wireless transmitters. When a user wants to have LAN or WAN Control, he can use a Tablet PC or  a Mobile Phone to control the system. It is specially convenient and easy to use a Mobile Phone to fire a backyard show, you will have a lot of fun.


Besides of the Intelligent Controllers, the OmegaFire Basal system can work with RF transmitters for range 200-1000m fireworks shows. It is competent for professional fireworks shows with thousands of firing.

Some features of the system:

A. LAN / WAN Controllable. You can even trigger firing from any location of the world, or build your local LAN and use your Mobile Phone to fire your fireworks shows.
B. RF Control available. Just use it like a conventional wireless firing system.
C. Wireless Firing or Timer Firing selectable. Among Timer Firing includes Countdown Firing, remote controllers are not necessary.
D. Can work out Music Control Firing.
E. Programmable and Intellectualized, can work out any script you require.
F. Unlimited Firing Points, is also suitable for big shows.
G. Program Firing, Manual Firing & Steper Firing, all in one.
H. Remote-upgradable. MB32 Series are high grade  Programmable Wireless Fireworks Firing Systems, the  systems  come with following specifications:
Can fire fireworks at desired firing time points, is flexible to achieve your purpose;
Accuracy 1 millisecond for assigning time points to cues to make you have an ideal show;
Unlimited firing cues at GROUP SYSTEM, you can make corresponding shows according to different scenes.
Visible DEMO in either a PC or local LCD, everything is in your hands.
Music Control, your audio player can do

it! The perfect match of music and fireworks show is just for you!
Friendly and easy PC interface, you will soon master the skills after study of yourself.
Selectable 3 firing modes-Dividual Firing, Interval Firing, Program Firing et c., can work out almost all the traditional firings.
FSK Modulation, more reliable and more steady remote control.

Firmware and software is upgradable available freely, you are having a newest system. It's totally worth it.
Extendable to be a SLAVE unit to let you have another excellent application in the future.
Others like Overload protection, Dual Powers, CRC Encryption etc..


.I really enjoy shooting with the MB32Q setup and it hasn't failed once.
.The MB32Q system is a good system, I do not have a lot of the issues that the Cobra system has. 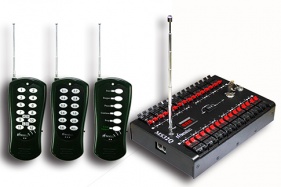 All items are FCC and CE certificated. 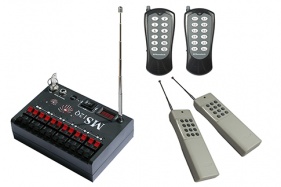 MS12 series are small 12 cue systems.
Overload Protection--Whatever the power type is or how you wire the igniter, the system will not be damaged.
Resetting Resistant--Special designs to prevent from resetting. Even the power is very low, the system will work normally. Nichrome Wires and reusable igniters can be used.
Optimized Firmware & Program--Just like the ones of other RFRemotech firing systems. Don't doubt its antijam ability, steady and reliable performance.
Dual Power Supplies--You can use an external power or internal batteries to power the firing module. The firing module can work at Max. 20V.
Simple & Easy to Use--Elegant profile, handy clips for wiring, ARM-LEARN-TEST 3 position switch for 3 states, easy learning button, extendable antenna can be folded.Inexpensive and worthy of the cost. 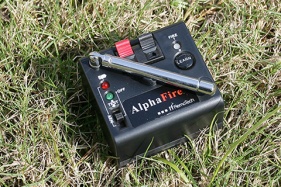 Sold more than 150,000 units, the No.1 distributed firing system in the world!

AlphaFire is the first product which was designed in 2008 and has been improved all along, and the current version is the 6th. It is a great design of us:
Safe & Reliable--Learing Code 1,000,000 address codes, Advanced & Opitimized Encryption Technology, Overload Protection and Short Protection circuit, MosFet etc..You don't worry of the harm to body or damage to the system.
Very compact--Can hide easily, specially suits indoor application.
Powerful enough--can flow more than 5 ampere firing current and is competent for most igniters.
Easy to use--Handy clips for wiring, ARM-OFF-TEST 3 position switch, easy learning button, extendable antenna can be folded.
Additional function-Low power indicator, short warning, it is useful and helpful.

The current version's antijam feature is far better than other distributed systems, any accident will never happen. And it is steady and reliable, users don't worry of failure. 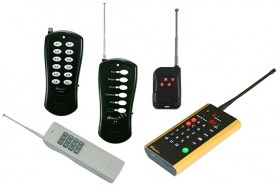 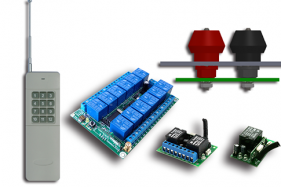 We developed EasyClips for firing systems, so that connecting and removing igniters become very easy, and the EasyClips 2P saves 80% time. These clips are so helpful for big shows to reduce the labor and save time. On the other hand, the clips make a firing system look very prefessional. If you are a hobbyist of DIY firing system, it is a great component.
Although it is so easy for EasyClips to connect or remove igniters, the connection is very tight.

We also provides wireless relay receivers and remotes / transmitters for DIY. Normally it is OOK type, 433.92MHz. They are all configurable so that the units meet your requirements. There units perform so well, many many people bought these remotes and boards.